Bhaskaracharya ll has been described as mediaeval India's greatest mathematician. He made a significant contribution to 12th-century mathematical and astronomical knowledge. Bharat’s great heritage, scientific and technological knowledge, concepts, and skills have always been ignored, not only by politically obsessed westerners, but also by many selfish Indians who despise Sanatana Dharma principles, knowledge in all subjects, and universal good principles.

Many western scientists and scholars have studied great Bharatiya philosophers, Rishis, Vedas, Upanishads, and the Bhagavad Gita to gain a better understanding of science, mathematics, space, engineering, and medicine. However, Bharatiyas have been brainwashed to see great heritage as nothing more than a knowledge of lower dignity and shame. We, as Bharatiya, paid a high social and economic price and developed a slave mentality.

Werner Heisenberg, German Physicist once said…After the conversations about Indian philosophy, some of the ideas of Quantum Physics that had seemed so crazy suddenly made much more sense…

The German philosopher Gottfried von Herder once said, “Mankind’s origins can be traced to India where the human mind got the first shapes of wisdom and virtue.”

German Philosopher, Schopenhauer writes in his monumental work ‘The World as Will and Representation’ — “In the whole world, there is no study so beneficial and so elevating as that of the Upanishads. It has been the solace of my life; it will be the solace of my death.” The knowledge of Upanishads is the jewel for all those who not only appreciate the universal hospitable culture of the Indian sub-continent, but also those who want to get to know the pure knowledge of the world-view and cosmic existence.

Bhaskaracharya ll was one such great mathematician.

Bhaskara ll (c. 1114-1185), also known as Bhaskarcharya (“Bhaskara, the teacher”) and as Bhaskara II to avoid confusion with Bhaskara I, was a mathematician and astronomer from India. According to verses in his main work, Siddhanta Shiromani, he was born in 1114 in Vijjalavida in the Sahyadhri mountain range, near the town of Patan in the Western Ghat region of present-day Maharashtra. 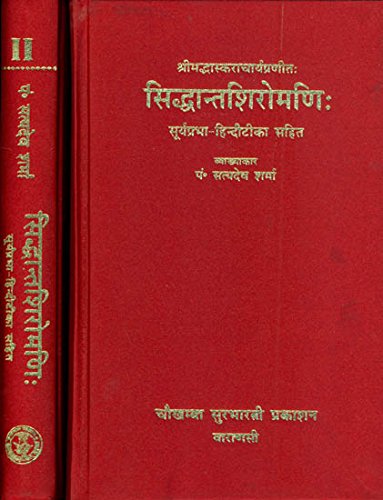 He is the only ancient mathematician who has a monument dedicated to him. Colebrooke was the first European to translate Bhaskaracharya II’s mathematical classics into English (1817). Bhaskara II lead a cosmic observatory in Ujjain, ancient India’s main mathematical centre. Bhaskara and his works made a significant contribution to 12th-century mathematical and astronomical knowledge. He has been described as mediaeval India’s greatest mathematician. His main work, Siddhanta-Shiromani (Sanskrit for “Crown of Treatises”), is divided into four parts known as Lilavati, Bijaganita, Grahaganita, and Goladhyaya, which are sometimes considered four independent works.These four sections cover arithmetic, algebra, planet mathematics, and sphere mathematics, in that order. He also wrote a treatise called “Karana Kautuhala”. He was born in the Shaka era (1114 CE) in 1036 and wrote the Siddhanta-Shiromani when he was 36 years old. When he was 69, he also wrote another work called the Karana-kautuhala (in 1183). His works reflect the influence of Brahmagupta, Sridhara, Mahavira, Padmanabha, and other forefathers.

The first section, Lilavati (also known as patiganita or ankaganita), is named after his daughter and contains 277 verses. Calculations, progressions, measurement, permutations, and other topics are covered.

There are 213 verses in the second section Bijaganita (Algebra). It covers zero, infinity, positive and negative numbers, and indeterminate equations such as (the now-famous) Pell’s equation, which is solved using the kuttaka method.

While discussing the motion of planets in the third section of Grahagaita, he considered their instantaneous speeds. He arrived at an approximation: it has 451 verses.

Among Bhaskara’s mathematical contributions are the following:

A Pythagorean theorem proof by calculating the same area twice and then cancelling out terms to get a2 + b2 = c2.

Integer solutions of indeterminate quadratic equations (Kuttaka). The rules he gives are (in effect) the same as those given by 17th-century Renaissance European mathematicians.

For indeterminate equations of the form ax2 + bx + c = y, a cyclic Chakravala method is used. The solution to this equation was traditionally attributed to William Brouncker in 1657, though his method was more difficult than the chakravala method.

Second-order Diophantine equation solutions, such as 61×2 + 1 = y2. The French mathematician Pierre de Fermat posed this equation as a problem in 1657, but its solution was unknown in Europe until the time of Euler in the 18th century.

Preliminary concept of infinitesimal calculus, along with notable contributions towards integral calculus.

Using an astronomical model developed by Brahmagupta in the 7th century, Bhaskara accurately defined many astronomical quantities, such as the length of the sidereal year, the time required for the Earth to orbit the Sun, as 365.2588 days, the same as in Suryasiddhanta. The modern accepted measurement is 365.25636 days, which is 3.5 minutes shorter.

It is time to study and respect these great people’s knowledge, which requires additional research to gain deeper insights that will benefit all.