Share on FacebookShare on TwitterTelegramEmail
All in all, the Bharatiya Janata Party is delivering, the cadre is motivated, and the leader is as charismatic as ever

No one expected the State elections of 2022 to be just an exercise in insipid electioneering. It was, after all, slated as the semi-final before the showdown that the General Elections 2024 have been projected to be. But not many could have either intuited that the anti-incumbency wave that rose more on social media and news debates had very little in the semblance of an actual whitecap or billow. On the contrary, there seemed to be a curious pro-incumbency wave that swept through four of the five States that went to the polls – Uttar Pradesh, Manipur, Goa and Uttarakhand, with Punjab seeing the emergence of the Aam Aadmi Party.

In all these four States, the Bharatiya Janata Party embarked on an effective engagement campaign that negated the attempt by varied opposition parties at discrediting the performance in the states by the incumbent State Governments. The cherry on the cake for the BJP has to be Uttar Pradesh. The State has been pivotal in discerning the mood of the nation, given the 80 Lok Sabha seats that the State commands. In recent times, the State elections in Uttar Pradesh just prior to the national elections have given us an idea on which way the political winds are blowing in the country.

In this time’s elections, Lutyens media left no stone unturned to show Akhilesh Yadav as the champion of socialism who will bring down the BJP juggernaut. Regardless of his personal wealth of Rs 40 crores, even as the multidimensional poverty index (MPI) of Azamgarh, which he represents in the Lok Sabha, is still 0.156. A as per the National Multidimensional Poverty Index Baseline Report 2021 of the Niti Aayog, the Samajwadi Party was projected as a party of the people. Only that a major cross-section of the State electorate did not agree with the reports’ conclusion. This was a party that had overseen a period of breakdown of law and order during its years in power, when Bahubalis (local strongmen) and their gangs held sway over various areas within the State. This was a party that still believed in caste consolidation and vote-bank politics as an effective method of securing power. This time Mamata Di, who seemed like a fish out of the water in Uttar Pradesh, and her `Khela Hobe’ sounded as sadistic as she did in West Bengal, given the years of anarchy and violence that the State politics of West Bengal and Uttar Pradesh have seen. We even had Asaduddin Owaisi and his All India Majlis-e-Ittehadul Muslimeen (AIMIM) enter the poll fray, only to come out of the elections with lesser votes than NOTA! 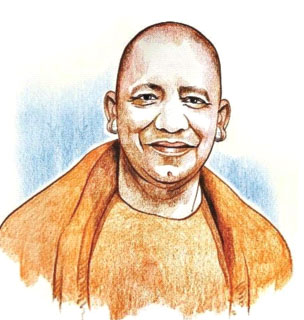 Everyone had their eyes on UP, given the vastness of the State. I am thankful to the people for making us win with the majority. Under PM Modi's leadership we will be forming Governments in UP, Goa, Manipur, and Uttarakhand.  By making us win people have once again voted for nationalism, good governance. It's our responsibility to continue working on these issues”  — CM Yogi Adityanath, Uttar Pradesh

Just like in 2017, the BJP, while mindful of the politics of identities and ideologies, seemingly wanted to break through the bounds thereof, with the slogan `Sabka Saath, Sabka Vikas’. Even with specific BJP MLAs facing strong anti-incumbency (such as in Varanasi South), this never quite developed into a tsunami against the Yogi Government, as was projected by many. Even with exits of OBC leaders like Swami Prasad Maurya, Dara Singh Chauhan and Dharam Singh Saini, as well as Akhilesh Yadav stitching formidable alliances with smaller parties such as the Rashtriya Lok Dal (RLD) in Western Uttar Pradesh and the Suheldev Bharatiya Samaj Party (SBSP), Apna Dal (K) in Eastern UP, the Bharatiya Janata Party checkmated the Samajwadi Party in its own game. There was significant dissent from Jats in Western UP, with issues such as stray cattle, sugarcane dues, electricity bills and inflation raised. This was also the time when massive protests such as the Kisan Mahapanchayat in Muzaffarnagar  were organised by Samyukt Kisan Morcha and a MAJGAR (Muslim, Ahir, Jat, Gurjar and Rajput) consolidation was looming. The 2013 Muzaffarnagar riots had cruelly torn asunder the unity that these communities may have had, particularly after the manoeuvrings of Chaudhary Charan Singh, back in the day. In the 2022 elections, appeasement was done to such extent where even an Ahir regiment was advocated for, in the Indian Army, not necessarily to recognise the bravery of Ahirs (such as in the last stand by 114 Ahirs of 13 Kumaon at Rezang La in the Sino-Indian war of 1962) but rather to be able to reinforce the MAJGAR thrust. In Eastern UP, Samajwadi Party tried casteist politics to garner OBC votes, besides all the poaching it did. They tried advocating for reservation for OBC in the private sector, conducting caste-based census within 3 months of attaining power, as well as declaring August 7 as Mandal Diwas.

The BJP strategically removed the influence of these factors systematically. Welfarism was one of the primary policy platforms that worked wonders for the BJP. The implementation of the Central Government schemes and free ration distribution was key, with there being 2.4 crore beneficiaries in the State under the PM Kisan Nidhi, 10.2 lakh houses completed under the PM Awas Yojana as well as 1.3 crore beneficiaries of the Ayushmaan Bharat scheme. The `double engine sarkar’ of the BJP in the Centre and the State empowered the regime to enact and implement many welfare policies in the State. BJP also employed a counter-consolidation strategy for areas like Western UP. The party particularly focussed on the non-Jatav Dalits and non-Yadav OBCs, and also reached out to the Jats with the repeal of the Farm Laws as well as special outreach programmes, thereby negating any significant MAJGAR consolidation. The SP-RLD seat-sharing did not yield dividends either, even as Bhartiya Kisan Union (BKU) president Naresh Tikait did a U-turn over extending support to Samajwadi Party-Rashtriya Lok Dal (SP-RLD) alliance.

In Central Uttar Pradesh, with its urban/semi-urban areas such as Pilibhit, Lucknow, Kheri and Unnao, the BJP introduced a nationalism angle by using a Ahmedabad blast order of the High Court. In parts like Varanasi and Ayodhya, Hindutva was front-and-centre, and rightly so, given the slew of activities and initiatives, from the development of the Kashi Vishwanath Dham to the initiation of the building of the Sri Ram Janmabhoomi Mandir. In phase six, the BJP appealed to the women voters and highlighted the problems faced under the Samajwadi Party Government and the security that women had under the BJP, which had launched Mission Shakti for women’s safety in 2020 and inaugurated more than 18,000 community toilets. Even the National Crime Record Bureau (NCRB) data shows that overall cases of crime against women in the State came down from 56,011 in 2017 to 49,385 in 2020. This was reflected in the way women turned up more and outnumbered men in phase six by 11 percent, and it is anyone’s guess which party they may have gone with. The most important achievement of the BJP thrust in the State elections was how it created the targeted strategy and messaging for disparate cross-sections of voters. For the aspirational classes as well as the well-to-do, it spoke on its development track record. For the downtrodden and migrant labour voters, it pitched the PDS system and other welfare schemes. The salient point here is that the BJP carried out work and had public memory to back these claims.

The State elections of 2022 in other States yielded important developments as well. Punjab showed over-reliance of the Congress on State leaders like Captain Amarinder Singh, whom they paradoxically alienated and sidelined! The Navjot Singh Sindhu hullabaloo fell flat, even as the Shiromani Akali Dal appeared to be a faded memory of its erstwhile glory. In Uttarakhand, while the Aam Aadmi Party was expected to do well initially, the wooing of Muslims by the party as well as irresponsible statements like those by Uma Sisodia (State spokesperson of AAP Uttarakhand) comparing the people of Uttarakhand to stray dogs in July 2021 meant that the BJP juggernaut rolled unchecked, even with there being a regular shuffling of Chief Ministers in the previous term. A major factor, as in Uttar Pradesh, was Prime Minister Narendra Modi’s magnetism and integrity. People on the ground felt that he and the State leaders had delivered on their promises, by and large. Goa has also seen an interesting evolution of the BJP in the post-Parrikar era, even as the Maharashtrawadi Gomantak Party has curiously aligned with Mamata Di’s Trinamool Congress. The journalist-turned Chief Minister of Manipur, Nongthombam Biren Singh, has also delivered on policies and in being able to bring peace by bridging the divide between the people of the Valley and the hills in the multi-ethnic, insurgency-hit State of Manipur. The voters have rewarded him and the State handsomely in the State Elections 2022.

For the security and development of the country, especially in such critical times internationally, we must stand with one of the strongest leaders the country has seen, post-Independence, and help India attain the heights that it can and must, as we move forward. And to that end, the `party-with-a-difference’ has definitely found its stride, and might I add, at just the right time!