Share on FacebookShare on TwitterTelegramEmail
The brutal murder of Bajrang Dal leader Harsha over his social media posts on hijab by a group of Islamist youth betrays the audacity of terror outfits like PFI and the level of radicalisation that has gripped the community. In the recent past, several Hindu activists have fallen victims to Islamist savagery in Karnataka. It’s high time the government takes multi-pronged and stringent action to curb the scourge of Islamism

In a brutal and barbaric way, a Hindu activist was killed in Karnataka's Shivamogga district for speaking of his love for motherland and Dharma. The murder has created panic across the Southern State. Twenty eight-year-old Harsha was stabbed to death on February 20, 2022.

Lamenting the brutal murder of the only son in the family, Smt Padma, mother of Harsha, recalled the words of her son, “It is my Bharat, it is my Bharat. I have to protect it.” The brave mother was proud of her son.  Tears rolled down the cheeks of everyone, when the exasperated mother was crying her heart out. She wanted to know whether working for protecting Hindu Dharma is good or bad.

Meanwhile, the activist’s sister, Ashwini, was deeply disturbed after receiving photos and videos from unknown mobile phone numbers of her brother lying dead in a pool of blood. “My brother, who always stood like a rock to protect the Hindu Dharma, is now in the cremation ground. Is this the brutal way a person should be killed? Aren’t there any values for humanity?,” Ashwini, overwhelmed by emotions, told reporters.

'My brother (Harsha), who always stood like a rock to protect the Hindu Dharma, is now in the cremation ground. Is this the brutal way a person should be killed? Aren’t there any values for humanity?'    – Ashwini

Ashwini appealed to brothers and sisters of Muslims and Hindus to become good children of their parents and not indulge in criminal activities.

Muslims Getting Support from Anti-India Lobby

Expressing concern over the killing of the young Hindu activist, National president of Shri Ram Sene, Pramod Mutalik alleged that there was direct involvement of terrorist organisations in the crime.

“Bharat is a peace-loving country. It is unfortunate that Muslim fundamentalists are trying to convert our country into Taliban. BJP, when it was in opposition, had protested for banning SDPI, PFI, and CFI but now it is not taking steps to ban them while in power. The panic among Hindu activists is increasing all over the State as Muslim fundamentalists are getting support from the anti-India lobby,” said the National president of Shri Ram Sene.

The Karnataka Police has swung into action and arrested a few members of the Muslim organisations in connection with the murder case. It was shocking that all were teenagers.

“We have arrested Mohammed Kashif, Syed Nadeem, Ashifullah Khan, Rehan Khan, Nehal, and Abdul Afnan in connection with the case. All are aged between 20 and 22 years, except Kashif who is 32. They are all residents of Shivamogga. A manhunt has been launched to track other accused,” revealed BM Lakshmi Prasad, Superintendent of Police.

Meanwhile, Mohan Gowda, spokesperson of Hindu Janajagruthi Samiti, released a video demanding justice for Harsha. “The State of Karnataka has been targeted by Muslim fundamentalists. The threats and attacks on Hindu activists are increasing all over the State, especially after the much-publicised Hijab issue.  The Muslim leaders are openly supporting the attacks by instigating communal violence. It is high time that the SDPI and PFI are banned,” said Mohan Gowda.

NIT Probe Can Be Initiated

Describing the death of the Bajrang Dal activist in Shivamogga as a conspiracy, Bharatiya Janata Party’s National General Secretary, CT Ravi, said that if necessary, the probe in the matter can be handed over to the National Investigation Team (NIT). Further, the BJP leader said, “Government should conduct a serious inquiry as the situation may trigger a reaction.”

A few years ago, the Mysuru Police was finally able to arrest a notorious gangster, who was instrumental in killing RSS workers in Mysuru. Atheeq, who used to stay in Lashkar Mohalla in Mysuru, was known to execute murders leaving behind minimal clues. He had been giving the police a chase for the past 10 years. Atheeq was the mastermind in several murder cases. 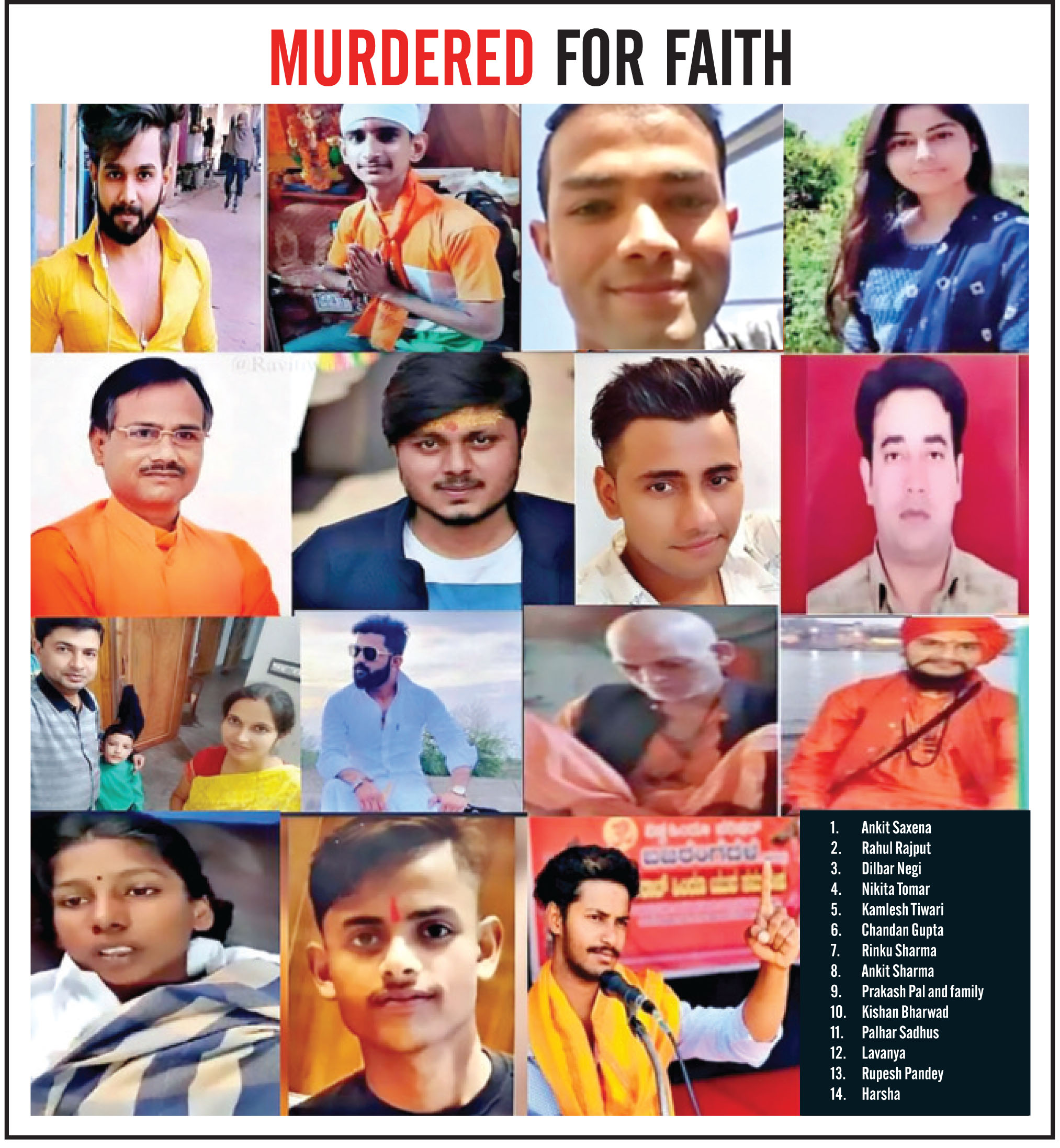 Atheeq’s modus operandi can be seen from the fact that he had built his team of Muslim youth, who would carefully track the Hindu leaders. Their job was to kill Hindu leaders and create communal tension. His team's USP was that they would plan murder in such a way that they would escape from the crime scene leaving no clues. His name had cropped up in the murders of Hindu leaders like Shashi Kumar, Ramesh, Raju, and so on. Atheeq and his team had also tried to kill Ashok Pai and Giridhar, top Hindu leaders of Mysuru. Kyatamaranahalli Raju, a Rashtriya Swayamsevak Sangh (RSS) activist who was opposing the illegal construction of a mosque in a residential area in Mysuru, was brutally hacked to death in broad daylight by Atheeq and his team in 2016. The deceased was standing near a tea stall when five men hacked him to death with lethal weapons. Raju had united  Hindus in various localities of Mysuru in creating awareness on the construction of an illegal mosque.

In 2018, Honnavar, a town in Karnataka, was tense following vandalisation of a temple and the breaking of the door of a house that belonged to a Hindu family. However, protection was not given as the entire police force was deputed to the program attended by the Chief Minister. The savage way in which Paresh had been tortured is beyond anybody's imagination. Hot oil was poured on him resulting in his entire body turning jet black. His hands (on which he has inscribed Jayarama) were chopped off. Paresh's body was found floating with his mouth gagged in a nearby temple pond (on December 8), two days after he was found missing.

Hindu activists Rudresh and Sharat Madivala were also killed in a brutal manner a few years ago. In 2017, a BJP councillor was brutally killed on the outskirts of Bengaluru. Srinivasa Prasad, who was popularly known as Kithaganahalli Vasu and a prominent Dalit face in the area, was brutally hacked to death with sharp weapons around 5 am.

In another incident, a 38-year old RSS activist was attacked by miscreants, when he was on his way to the shakha in the heart of Bengaluru on June 11, 2016. Ramesh Vaishnav, Chikpet Nagar Sharirik Pramukh, was attacked when he was going for the morning Amar Prabhath Shaka. As a result, Ramesh sustained serious injuries and was immediately admitted to a local hospital as he was brutally attacked by a few unknown miscreants.

In another condemnable case, a Hindu activist was killed at Moodbidri (Karnataka) for championing the cause of anti-cow slaughter. Prashanth, 29, was selling flowers at Moodbidri Market when six persons came in two bikes and hacked him to death with sharp weapons on October 9, 2015. He was rushed to the hospital but couldn't survive. His family members claim that just before his death, Prashanth revealed important details about his killers to the cops.

An RSS activist, Kuttappa, was killed during the controversial Tipu Jayanti program at Madikeri. However, the police have failed to make any  headway till now.