by
in Bharat, Jammu and Kashmir Vikramaditya Singh said he joined the Congress in 2018 with expectations that it'll take steps on aspirations of the J&K public, but nothing much happened (Photo Source: Facebook-Vikramaditya Singh)

Vikramaditya Singh slammed Congress for denying Kashmir Pandits genocide, exodus and cited it as one of the reasons for quitting the party.

New Delhi: The crisis in Congress vis-à-vis the organisational weaknesses and challenge to 'Nehru-Gandhi dynasty' is far from over.

"There are many accomplished Congress leaders in G-23; ignoring them is a big mistake. If you don't change with time, don't keep public and youth aspirations in mind, you will fade away," he said.

In reference to rebellion by a group of 23 leaders, he said, "If a group has emerged to give suggestions to high command, the party should cooperate."

In the context of the latest row following the release of the film 'The Kashmir Files' that portrays the true factors that led to the exodus of Kashmiri pandits, he said, "I have not watched the film 'The Kashmir Files'…but I was in Srinagar till 1989… It's sad that Congress is still in denial (about the exodus) and is not accepting the repercussions of the Kashmiri genocide." 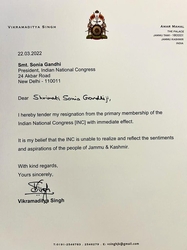 Vikramaditya Singh resigned from the party and said the party didn't reflect the sentiment and aspiration of the Jammu and Kashmir public (Photo Source: Twitter)

He said he had joined the Congress in 2018 with expectations that it will take steps on aspirations of the J&K public, but nothing much happened.

"I suggested organisational changes, but it was upsetting when I saw no changes even after two-three years," he said.

In Punjab, Rahul Gandhi had banked heavily on cricketer-turned-politician Navjot Singh Sidhu, who had to face a humiliating loss in the election. Former Congress chief minister Charanjit Channi, a Dalit leader, also lost from his two contested seats.