Creating history in Uttarakhand, the Bharatiya Janata Party (BJP) is all set to form the Government in the hill State. Since the State was carved out of Uttar Pradesh in 2000, no ruling party had ever returned to power in the election. But now it has changed. In the Assembly elections, for which results were announced on March 10, the party is all set to return to power winning 50 of the 70 Assembly seats.

What worked for the BJP in Uttarakhand is the excellent implementation of the State and Central schemes coupled with Modi’s appeal among voters. Besides this, the spillover effect of UP has also given the people confidence to put their weight behind the saffron party. The party managed and worked like a well-oiled machine, leaving no room for Congress, plagued by factional feuds, to rake up any plausible issue against the State Government or the Centre.

The man who led the charge for the BJP in the State, Pushkar Singh Dhami, assumed Chief Minister’s office only in July last year. Being the third chief minister of the BJP since the party had won landslide in 2017 Assembly polls, expectations were very high. In just six months, he travelled the nook and corner of the State and ensured effective implementation of the multiple Central as well as State Government welfare schemes. Since the start of Covid-19 pandemic in March 2020, Prime Minister Narendra Modi had announced free ration for the people. The Pradhan Mantri Garib Kalyan Anna Yojana, announced in March 2020, had the target of ensuring no one goes to bed empty stomach. 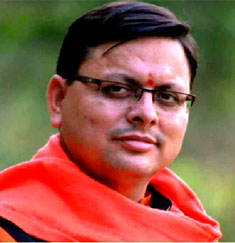 The victory of BJP in Devbhoomi is the result of the efficient leadership of the Prime Minister, your guidance and public welfare works conducted in the state — Pushkar Singh Dhami, former Uttarakhand CM

Prime Minister Narendra Modi had announced that his Government would not allow anybody, especially any poor family, to suffer on account of non-availability of foodgrains due to disruption caused by Covid-19. To ensure this, the Modi Government decided to provide free ration to almost 80 crore individuals in the country.

Uttarakhand has a very tough terrain and there are multiple villages where it’s very difficult to ensure connectivity round the year. The task of ensuring that even people in such villages are not left behind and get benefits of schemes fell on the shoulders of two-term MLA Dhami.

Dhami, who started his political career with the Akhil Bharatiya Vidyarthi Parishad (ABVP), led the youth wing of the BJP, Bharatiya Janata Yuva Morcha, in the State till 2008. In 2012, he made his electoral debut and became an MLA. At 46, when he assumed the chief ministership last year, he had his task cut out: to steer the party in Assembly polls.

The State, which was carved out from Uttar Pradesh in 2000, was always starving for development. Since the BJP assumed power in the State in 2017, it got the Union Government to start projects worth Rs 1.40 lakh-crore. Massive infrastructure development started in the state. In his election rallies in the State, Prime Minister Narendra Modi assured people that with a BJP Government in the State he will ensure that the speed of development is not slowed and the State will witness the growth of a ‘double engine’ Government.

He had accused the Congress party of thinking about Uttarakhand only for their leisure and never for the people of the State. “The Congress’ intention and loyalty can be figured out with their election campaign and slogans. They were in power in Delhi and UP for years, used to travel to Uttarakhand for leisure, but never thought of its pilgrimage, tourism, or Chardham. Villages got empty, people migrated,” PM Modi said at a virtual rally in Uttarakhand on February 8.

The Ministry of Road Transport & Highways of the Union Government had taken up separate programme for connectivity improvement for Char-Dham (Kedarnath, Badrinath, Yamunothri & Gangothri) in Uttarakhand.

Crediting Shankaracharya for showing him the path, PM Modi had said, “We are doing all this because today’s India shows faith in the directions of great personalities like Adi Shankaracharya and takes pride in that. Some people question how we will do everything in such a short time. Then a voice comes from within me. I hear the voice of 130 crore Indians and all I say is that India does not accept to be bound within time limits and getting scared anymore.”

After this visit of the Prime Minister, Chief Minister Dhami announced that his Government would repeal the Uttarakhand Char Dham Devasthanam Management Act, 2019. “Considering the sentiments and interests of people, honour of priests and stakeholders and others associated with Char Dham and on the basis of the report of a high-level committee constituted under Manohar Kant Dhyani, the Government has decided to repeal Devasthanam Board Act,” said Shri Dhami.

The Bill, which had led to massive uproar, was aimed at bringing the Char Dham of Badrinath, Kedarnath, Gangotri and Yamunotri and 49 other temples under the purview of a proposed shrine board. Together with welfare schemes, PM Modi made sure that Uttarakhand gets back its spiritual and cultural glory.

Through its historic mandate, the people of Uttarakhand not only appreciated the good works of the BJP Government but also rejected the divisive politics of the Congress. At the peak of the campaigning in the State, Uttarakhand Congress vice-president Akil Ahmad created a controversy when he said that former Chief Minister and CM face of the party, Harish Rawat, had promised him a Muslim only university in the State.

The BJP accused the Congress of polarising the electorate. Chief Minister Dhami had said, “Congress party has been engaged in Muslim appeasement ever since the Independence of India. Uttarakhand is a Devboomi and a centre of Char Dham pilgrimage, where Congress wants to set up a Muslim university, while it has opposed Sanskrit university plan of Karnataka Government. People of Uttarakhand will not accept the divisive politics of the Congress party and reply to them suitably.”

The Prime Minister reiterated the message in his Almora rally on February 11 when he said that he won’t let the opposition divide people in the name of caste, colour, religion or gender. “Our opponents have the formula of ‘sabme daalo phoot, mil kar karo loot’. The Congress party had this policy not just in Uttarakhand but the entire country. They have divided people in the name of caste, belief, religion, language and state. Within states, they divide on the basis of areas… No one has suffered from this as much as Uttarakhand. They attempted to create a divide between Garhwal and Kumaon so that they can loot both,” PM Modi had said.

With State now firmly in its control, the BJP’s task has again been cut out: of continuing the development momentum in the Devbhoomi.