While Al Qaeda is already feeling enthusiastic about Afghanistan slipping into the grips of the Taliban, there also is alarming news about the increased activities of Al Qaeda and the Islamic State (ISIS) in Turkey.

With the withdrawal of US and NATO troops from Afghanistan and the country gradually slipping into grips of the Taliban, the global terror network Al Qaeda has started increasing its terrorist agendas. According to media reports, in India, security at Indira Gandhi International Airport (IGI) has been beefed up following a bomb blast threat received by Delhi Police. Delhi Police has received threats through e-mail that the terror outfit is plotting an attack on al-Qaeda airport. IGI Airport said in an official statement that additional alerts have been issued after receiving the email, and all security measures have been beefed up.

On Saturday, the IGI police station informed the Airport Operation Control Centre about an email received by the al-Qaeda chief about the bomb blast threat, the airport said in a statement. ”It said Karanbir Suri alias Mohammad Jalal and his wife Shaili Shara alias Hasina are arriving in India from Singapore on Sunday. They are planning to plant bombs at the airport in one to three days”.

Meanwhile, according to Long War Journal, Hurras al Din (the “Guardians of Religion” organization, or HaD) has claimed responsibility for a bus explosion in Damascus. In a one-page statement posted on social media, the al Qaeda group says that an improvised explosive device targeted the bus, which was carrying members of the Syrian Republican Guard. 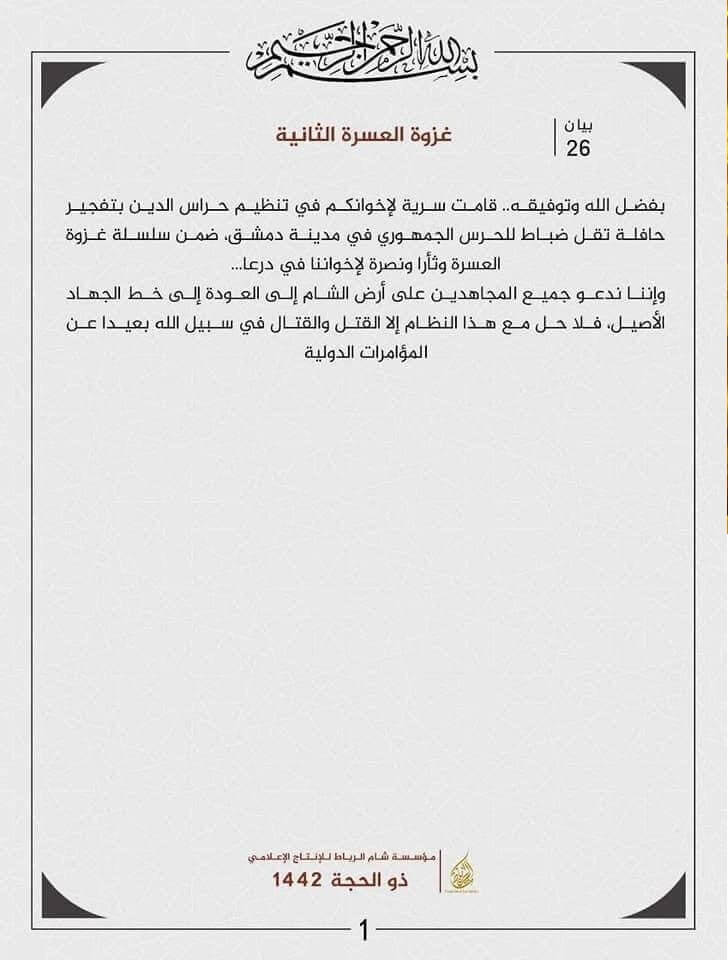 Hurras al Din (the “Guardians of Religion” organization, or HAD) has claimed responsibility for a bus explosion in Damascus

Other sources, including jihadist social media accounts, claim that the casualty count was much higher, with upwards of 19 or more Syrian military personnel killed.

“Thomas Joscelyn is a Senior Fellow at the Foundation for Defense of Democracies, and the Senior Editor for FDD’s Long War Journal said, “If HAD’s responsibility is confirmed, then it the attack is potentially significant. The jihadists have demonstrated little ability to strike inside the Syrian capital in recent years. Indeed, some pro-HaD accounts on social media have openly wondered if the reported bombing is a harbinger of more attacks behind enemy lines in the months to come”.”

He said: “Hurras al Din grew out of the fierce disagreements within the jihadi scene in Idlib, Syria. The group, which is headed by al Qaeda veterans, split from the larger jihadi actor, Hay’at Tahrir al-Sham (HTS), which was formerly known as Al-Nusrah Front. HaD’s key leaders were once part of Al-Nusrah’s hierarchy”.

While Al Qaeda is already feeling enthusiastic about Afghanistan slipping into the grips of the Taliban, there also is alarming news about the increased activities of Al Qaeda and the Islamic State (ISIS) in Turkey.

Last week, US Treasury Department announced that two money men working for Al Qaeda and Hay’at Tahrir Sham (HTS) were designated. The designations are part of a broader US effort to sanction individuals and entities taking part in the Syrian war. Other extremists and parts of Bashar-al-Assad’s regime were also designated.

Hasan al-Shaban is one of the two bag men targeted by the Treasury. He is described as a “Turkey-based al Qaeda financial facilitator” who “materially” assists the worldwide insurgency and terrorist network.

Treasury said that an al Qaeda “fundraiser” provided al-Shaban’s “banking information…to prospective donors as a way for them to send money to support al Qaeda military efforts and the so-called mujahideen fighting in Syria”.

Treasury’s brief announcement indicates that al-Shaban is part of a global illicit financing scheme that utilizes the “formal financial system” for nefarious purposes. Al-Shaban’s bank accounts are used by al Qaeda members “to coordinate the movement of money from associates across North Africa, Western Europe, and North America.” In addition, al Qaeda works with al-Shaban to “coordinate the transfer of funds to Turkey”.

Here again, the most disturbing news is, while al-Shaban works for al Qaeda, the U.S. government has repeatedly designated and sanctioned other jihadist facilitators based in Turkey who work for the Islamic State (ISIS). In January, the Treasury Department reported that the Islamic State continues to rely on “logistical hubs” in Turkey.