Share on FacebookShare on TwitterTelegramEmail
The Union Budget and post-Budget amplification of Government’s policy on crypto assets by Prime Minister Narendra Modiji has brought in clarity. Best of the currency and stock market brains will now have to provide inputs for a pragmatic and sustainable policy on cryptos

Scottish journalist Charles Mackay in his epic book, Extraordinary Popular Delusions and the Madness of Crowds captured the financial mess induced by tulip mania that gripped Dutch Republic during 1634-37.

In the book that gained popular attention in 1841, Mackay elaborates as to how one tulip bulb turned more expensive than five hectares (12 acres) land at one point of time. This frenzied financial speculation in Dutch Republic aptly explained Tulip mania as part of markets history globally.

Prices of tulips suddenly collapsed in February 1637 after the asset bubble burst thereby investors losing millions in dollars. At the height of tulip mania, as several documented works point to, one bulb cost ten times more than the annual income of a skilled artisan in Dutch Re

Shakti Kanta Das refreshed financial markets, key stakeholders and investors with how Dutch Republic’s vibrant markets went down following the tulip bubble burst in two years of speculative trading that had no logic, reasoning or rationale that defined crowd mentality.

At the recently held two-day monetary policy committee meeting chaired by RBI Governor Das, some discussion seems to have happened on imposition of complete ban on private crypto currencies by statute, orderly and phased introduction of digital rupee that was convertible with physically held notes. Even the technology platform that would host the digital rupee with options beyond block chain based mints were considered to ring the digital rupee that’s yet to be formally branded and named.

Customary post-Budget monetary policy committee meeting not only discussed prospects of a digital rupee but on the parallel held interest rates and continued the accommodative stance to provide room for economic growth that Finance Minister Nirmala Sitharaman aspires to achieve through capital investment push and infrastructure development.

Only a few days earlier, RBI Deputy Governor T Rabi Sankar called for a complete ban on crypto currencies as an asset and currency, taking several stakeholders by surprise. More interesting is Rabi Shankar’s line that crypto currencies were more speculative or manipulative contracts vis-à-vis ponzi schemes. By inference what Shankar meant was that the original scheme, devised by Charles Ponzi in 1929, was superior given that transactions led to investments in earning assets. 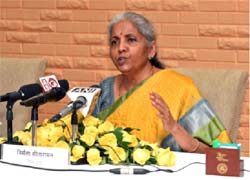 Since these calls were made on the very day when Sitharaman was chairing post-budget RBI Board of Directors meeting, it was obvious to point to differences in perspective on crypto currencies. But then, alert Finance Minister Nirmala Sitharaman was quick to reaffirm that both Government and RBI were on the same page vis-à-vis crypto currencies like several other financial and economic issues. Ace investor and big bull Rakhesh Jhunjhunwala provided an altogether different view on crypto currencies.

In a recent TV interview, Jhunjhunwala predicted a virtual rout of the cryptos market.
Veteran market insiders cited Jhunjhunwala’s huge exposure in equity markets and fear of capital flight in favour of crypto currencies as enough reason for this unjustified prediction. But then, virtual collapse of crypto currencies also means small investors globally would be at the receiving end.

Now, the question doing the rounds is whether Finance Minister Sitharaman concurs with RBI to completely ban crypto currencies by choice as an asset, currency, security or collateral and put them in cold storage. If one were to gauge RBI’s stance, banks may not accept crypto or private digital assets as collateral to make lending to corporates, individuals or businesses.

Both, RBI and Government may be on the same page to not allow cryptos as currency. Now, comes the hard part. Then how does one collect taxes on crypto assets related transactions at 30 per cent? And, also levy transaction fees of one per cent on buying and sale of digital assets?

Taxation is the only thin line that lends legitimacy to digital assets, which the Finance Minister needs to rethink while comprehensively revisiting the Government’s framework on crypto currencies, official digital rupee and taxation.

Well, it may not be easy after all. But then, the Union Budget and post-Budget amplification of the Government's policy on crypto assets by Prime Minister Narendra Modiji has brought in some clarity.

Best of the currency and stock markets brains will now have to provide inputs for a pragmatic policy and  sustainable policy on cryptos. Rushing through may not help anyone.