Truschke started this letter campaign after the Delhi High Court ordered her not to publish any defamatory material against Dr Sampath (Photo Credit: OpIndia)

On February 24, US academician Audrey Truschke started circulating a letter signed by over 75 academicians condemning Dr Vikram Sampath’s move of filing a defamation suit against her.

Many historians, politicians and academicians have said US-based historian Dr Audrey Truschke has forged their signatures on a letter condemning Dr Vikram Sampath’s move of filing a defamation suit against her and her collaborators.

Shiv Sena leader and Member of Parliament Sanjay Raut Sunday (February 27) said he signed no such letter. His party colleague and fellow parliamentarian Priyanka Chaturvedi said, “Senior leader Sanjay Raut ji hasn’t signed any such petition. I have spoken to him on this and he has confirmed the same.”

On February 24, Audrey Truschke started circulating a letter on social media claiming more than 75 personalities have supported her and signed a letter condemning Dr Vikram Sampath’s move of filing a defamation suit against her and her collaborators. 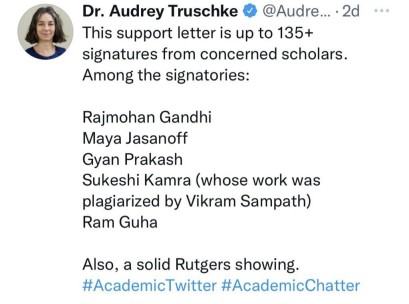 Earlier this month, Audrey Truschke, Ananya Chakravarti and Rohit Chopra had written a letter to the Royal Historical Society alleging plagiarism against Dr Sampath, who had recently published a two-volume biography of Veer Savarkar.

In the letter to the Royal Historical Society, Ananya Chakravarti, Rohit Chopra, and Audrey Truschke have alleged that Dr Sampath has plagiarised his essay in the India Foundation journal. They have demanded that his membership of the Society be rescinded.

Contrary to what they have alleged, it was not an essay but a speech delivered at the 2017 India Foundation event. In that speech, Dr Sampath had duly acknowledged the works of Dr Vinayak Chaturvedi and Dr Janaki Bakhale. Secondly, Dr Janaki Bakhale reviewed Dr Sampath’s book for India Today in September 2019 and has not talked about plagiarism anywhere.

Although Dr Sampath has not quoted undergraduate scholar Paul Schaffel, he has made sure to acknowledge his undergraduate thesis in his bibliography of works referenced.

Truschke started this letter campaign after the Delhi High Court ordered her not to publish any defamatory material against Dr Sampath.

Distancing himself from the letter, Indian columnist Pratap Bhanu Mehta said, “It has come to my notice that I am listed as a signatory to this letter. I did not receive the contents of this particular letter and never signed it. I also have institutional affiliations that would have been part of my signature.” 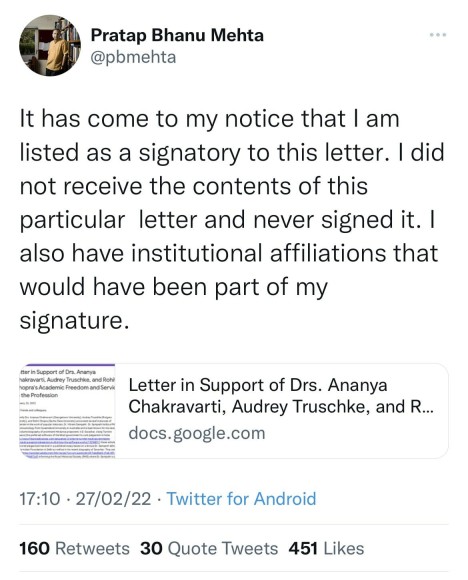 Another Indian columnist, Ramachandra Guha, also distanced himself from the letter alleging his signature was forged. He said, “My attention has been drawn to this letter below. I had never seen it before, and contrary to what is claimed there, I have not signed it, neither as Ramachandra Guha nor as “Ram Guha”.” 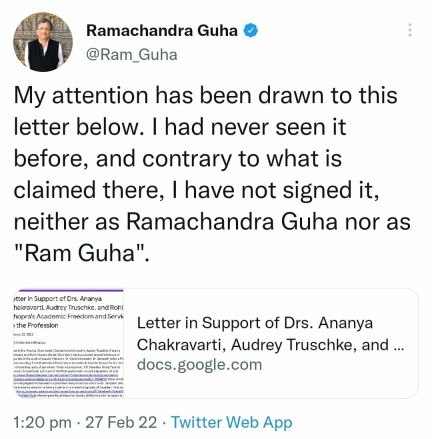 In a statement, Dr Sampath said, “As Suhag Shukla & others had pointed out, same crooks had unethically used University logos whilst organising the sham Dismantling Global Hindutva conference. No one faced music for such blatant fraud. Forging signatures to play victim card is a new low!”image widget