The Shiksha Sanskriti Utthan Nyas has been campaigning for promotion of mother tongue in education. Taking cue from its campaign, the National Education Policy (NEP) 2020, approved by the Centre, gives emphasis to mother tongue along with other languages. “For the country to progress, Bharat should make mother tongue the medium of education. Bharatiya languages should be used in judiciary and administration,” says Shri Atul Kothari, National Secretary of the Nyas. According to him all developed countries use their native languages as the medium of education in primary and secondary schools. Ashish Kumar ‘Anshu’ spoke to Shri Kothari on wide-ranging issues related to mother tongue and NEP. Excerpts:

In the present context, although language has emerged as a topic of discussion in the country, the importance of mother tongue is seen getting diminished. In the last 40 years, at least 150 studies have insisted that education should be imparted in mother tongue as a child imbibes culture through native language while still in the mother’s womb. Noted scientist C V Srinath Sastry says students who had done engineering courses in their native language undertake more scientific researches compared to students who had done the course through English medium. According to the research by Dr Nandini Singh of National Brain Research Centre, Gurgaon, education in English activates only one portion of the brain while learning in Hindi activates both portions. Sir Isaac Pitman had said that if at all there is an all-round script, it is Devnagri. Education, research, books, etc., through foreign language is against modernity because modern knowledge can be imparted to all sections of the society in their own language. 'Former US presidents from Bill Clinton to Barack Obama had exhorted their students to excel in Maths and Science otherwise Indian and Chinese students would leave them behind. They did not say this about English'

If we take the case of Hindi, barring a few States does it enjoy acceptance within or outside the country?

Currently, Hindi is taught in some way or the other in 170 countries.  Samskrit is being taught in the universities of more than 32 countries. Learning Samskrit for six years is compulsory in England’s St James’s School. In Bharat, too, wherever there was opposition to Hindi due to political reasons, wherever use of Hindi was considered limited — like in Tamil Nadu, Mizoram and Nagaland — in these States also Hindi speaking classes are coming up in a big way. Hindi is the language of public dealings in Arunachal Pradesh and Nagaland has recognised Hindi as the second official language. People are enrolling for Hindi examinations conducted by Dakshin Hindi Prachar Sabha, Rashtra Bhasha Prachar Samiti, etc., in large numbers. In reality, English doesn’t pose any challenge to Indian languages – the challenge is from Indians with English mind set.  We don’t need to do the advocacy of Hindi or any other Indian languages for that matter, but in national interest, we must definitely advocate what is scientific and logical.

February 21 is International Mother Language  Day. Can you please explain the role of mother tongue in shaping the personality of a student?

Mother tongue is easy to learn and understand. It is an easy medium to acquire knowledge. On the basis of his experience, former President Dr Abdul Kalam had said: “I became a good scientist because I learnt Maths and Science in my mother tongue.”  In English medium, one has to put in more effort in studies. To study Medicine or Engineering, one has to master English first before mastering the subject. Pandit Madan Mohan Malviya was a scholar in English. Even English scholars used to turn up to listen to his speeches. But he had once said: “I have been using English for the last 60 years. But the ease in speaking Hindi does not happen with English.” Nobel laureate Rabindranath Tagore says:
“If Science has to be made accessible to public, then it has to be taught in mother tongue.”

It has become an accepted fact that without English one cannot progress in life. One can grab good jobs only if one is proficient in English. Is it not a big challenge?

Certain so-called scholars argue that an individual or nation cannot progress without English. But no great man had ever said something like this. Former US presidents from Bill Clinton to Barack Obama had exhorted their students to excel in Maths and Science otherwise Indian and Chinese students would leave them behind. They did not say this about English. World’s most affluent countries in terms of economy and intellectual capital such as US, Russia, China, Japan, South Korea, England, France, Spain and Israel have native language as the lingua franca as well as the official language. Sixteen scientists have won Nobel Prize in Israel. All these scientists had carried out their work in their mother tongue, Hebrew. Eminent scientist and former Microsoft employee Sankrant Sanu, in his book, writes that the top 20 countries in terms of Gross Domestic Product carry out all their activities in native language. Out of this, four are English-speaking countries and their native language is English. He further writes, 20 countries which are backward in terms of Gross Domestic Product are either giving higher education in a foreign language or foreign and native languages and administrative languages are also on these lines. It means the country cannot progress unless it makes native language as the medium of education, competitive examinations, judiciary and administration. 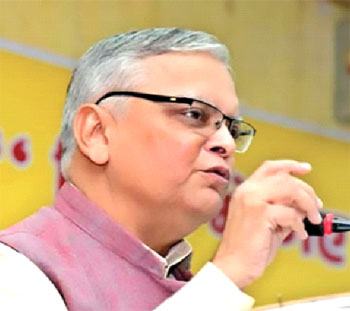 'Noted scientist C V Srinath Sastry says students who had done engineering courses in their native language undertake more scientific researches compared to students who had done their courses through English medium. According to the research by Dr Nandini Singh of National Brain Research Centre, education in English activates only one portion of the brain while learning in Hindi activates both portions'

According to former director of NEPA Shri Pradeep Joshi, world famous atomic scientist and Vice-Chancellor of Hiroshima University of Japan doesn’t know English. It is also argued that in the age of gloabalisation knowledge of English is necessary for travelling abroad. Every year about 2 lakh students go abroad to study. All are not going to English-speaking countries. For the benefit of few, if thrusting English upon crores of students as a mandatory subject is not injustice or atrocity, then what is it? As it is learning a language is not a tough task. Any language can be learnt in three to six months. Only knowledge of English is not allowing us to take benefit of knowledge in other languages. For instance, books on Science are available in large quantity. Likewise, Germany had produced great philosophers. Poetry, literature and books on archaeology are found in abundance in French.

What, according to you, are the salient features of National Education Policy-2020?

In order to bring about synergy between education and society the present National Education Policy-2020 also lays emphasis on multilingualism and the potential of language in the teaching-learning process. Imparting education in mother tongue, regional language, or language spoken at home up to Class 5, and if possible up to Class 8, has been advocated in the education policy. Conservation, promotion and development of Bharatiya languages has also been emphasised in the policy. Likewise multilingualism at the higher education level has also been accepted in the policy. But its implementation is the main challenge. There are many myths associated with languages in our country. And one such myth is that English is the language of growth and knowledge. Researches by institutions like UNESCO have proved that imparting education in one’s own language can only lead to development of the child in the true sense. Therefore, imparting education in mother tongue is entirely scientific. This view has also been concurred by National Brain Research Centre and other educational institutions.