Share on FacebookShare on TwitterTelegramEmail
In the passing away of legendary singer Lata Mangeshkar, Bharat lost its most beloved voice

Lata Mangeshkar, the Bharat Ratna awardee, passed away at 8:12 am on February 6, after suffering a multiple-organ failure at Mumbai’s Breach Candy Hospital. She was admitted to Mumbai hospital in early January this year, after she tested positive for COVID-19 and was also diagnosed with pneumonia.

While she was admitted to the ICU with mild symptoms, on January 28, the singer was taken off the ventilator, after she showed slight signs of improvement. However, her condition deteriorated again on February 5 and she was back on ventilator support.

In a series of tweets, PM Modi said that the singer has always wanted to see a strong and developed India. “I am anguished beyond words. The kind and caring Lata Didi has left us. She leaves a void in our nation that cannot be filled. The coming generations will remember her as a stalwart of Indian culture, whose melodious voice had an unparalleled ability to mesmerise people,” PM Modi tweeted.

“Lata Didi’s songs brought out a variety of emotions. She closely witnessed the transitions of the Indian film world for decades. Beyond films, she was always passionate about India’s growth. She always wanted to see a strong and developed India,” Prime Minister Modi said. 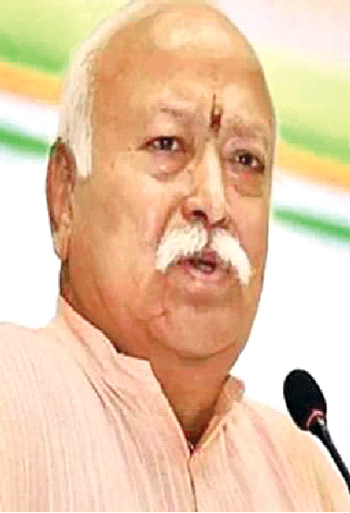 'It is difficult to describe in words the pain felt by the people of the entire country due to the demise of Lata Mangeshkar. May God give her family the patience to bear this loss. I pay tribute to her on behalf of myself and the Sangh' — Dr Mohan Bhagwat, RSS Sarsanghchalak

The Prime Minister said that his interactions with Lata Mangeshkar will remain unforgettable. “I consider it my honour that I have always received immense affection from Lata Didi. My interactions with her will remain unforgettable. I grieve with my fellow Indians on the passing away of Lata Didi. Spoke to her family and expressed condolences. Om Shanti,” he tweeted.

Union Minister Nitin Gadkari said that Mangeshkar’s contribution to Indian music is incomparable. “The country’s pride and music world’s Shirmor Swar Kokila Bharat Ratna Lata Mangeshkar ji’s demise is very sad. My heartfelt tribute to the holy soul. Her passing is an irreparable loss to the country. She was always an inspiration to all the music seekers,” Gadkari tweeted after he visited Breach Candy Hospital in Mumbai.

“Lata Didi was an intense patriot. She has always had a firm faith in the ideology of Swatantraveer Savarkar. Her life has been full of many achievements. Lata ji has always been an inspiration to all of us for good deeds. Her contribution to Indian music is incomparable,” he said in another tweet.

“Sad to learn about the demise of Swar Kokila, Lata Mangeshkarji. She enriched our lives for decades with her soulful voice. The nightingale of India has passed away but she will live in our hearts forever. Om Shanti,” Union Minister Pralhad Joshisaid expressing his condolences.

Born on September 28, 1929, she began her career in the year 1942 at the age of 13. In a career spanning over seven decades, the melody queen recorded songs for over a thousand Hindi films. She had sung songs in over thirty-six regional Indian languages and foreign languages.

In 2001, in recognition of her contributions to the nation, she was awarded the Bharat Ratna, India’s highest civilian honour and is only the second vocalist, after MS Subbulakshmi, to receive this honour.

She’s also the recipient of three National Film Awards among many other honours she received during the span of her career. ‘Aye Mere Vatan Ke Logon’, ‘Babul Pyare’, Lag Ja Gale’ among others are some of her iconic songs.