Nullification of Article 370 and Article 35(A) was not easy for the Modi Government. But two years on, things are changing for the better on the ground, belying doomsayers

It was 10.30 pm (July 29), and I was at Lal Chowk. Yes, you read it right, Lal Chowk. The historic Lal Chowk of Srinagar remained the symbol of the anti-India campaign by dynast politicians and jihadist forces. Hoisting Tricolour at Lal Chowk was a dream for many nationalists. One cannot forget the day (January 26, 1992) when Bharatiya Janata Party (BJP) leader Murli Manohar Joshi and Narendra Modi unfurled Tricolour amid heavy security at Lal Chowk, sounds of gunfire rocked the city. We are all aware that Lal Chowk always had high impact value, in terms of media attention, towards any terrorist incident. On August 5, 2019, Narendra Modi-led NDA Government made Article 370 and 35(A), which accorded special status to Jammu & Kashmir (J&K) for decades, inoperational.

Two years later, it is important to assess whether J&K is better placed than it was before August 5, 2019. On that day, Union Home Minister Amit Shah said in the Rajya Sabha that Article 370 was used for “vote bank politics and the earlier Governments lacked the political will to revoke it, but the Modi Government has the political will, and we are not bothered about vote bank politics”. The Government claimed the move would change the fortune of J&K.

After two years, I can say this Kashmir is undoubtedly a ‘New Kashmir’. I have been covering J&K for the last five years and have visited the State many times, but the Valley never seemed like this, and Lal Chowk never looked like this. The same Lal Chowk is drenched in Tricolour hues. Illuminated using laser lights, it gives an ambience similar to India Gate at India's National Capital or Gateway in Mumbai.

J&K, once infamous for stone-pelting incidents, attacks on security forces and daily encounters, is changing fast ever since the Narendra Modi-led BJP Government abrogated Articles 370 and 35A.

Anantnag (south Kashmir), one of the districts of J&K barely 60 km away from Srinagar, which was once infamous for terrorism-related activities, is now witnessing the change post-abrogation of Article 370. The south Kashmir region comprising four districts Shopian, Pulwama, Anantnag, and Kulgam has been the stronghold of terrorists and Over Ground Workers (OGWs), and most of the terrorist attacks in the Valley have taken place in the region.

A CHANGE IN PERCEPTION

During my visit to Anantnag district, I met several people to know their feelings about the ‘New Kashmir’.

“Kashmir badal raha hai, aur sabse badi baat Kashmir ka yuva badal raha hai (Kashmir is changing but the most significant thing is youth of Kashmir is changing),” was the feeling of Mohd Ajmal. Sharing his experience of two years post-abrogation of Article 370, he said, at one point in time, locals here were afraid of coming out of their houses during the evening, but now the situation has changed for the better. Local youth of Anantnag is currently engaged in positive things instead of stone-pelting and indulging in anti-India or terrorism activities. And one of the major reasons behind this is that those Hurriyat, politicians, who once used to misguide the youth, are now either behind bars or have become insignificant. There has been a significant fall in the involvement of local youth in terrorist organisations.

“Previous Governments in J&K looted us for decades and did nothing for the Kashmiri youth. They gave us money not for development of ours but to pick up guns against our own people. Thankfully, the situation is fast improving. The mindset is slowly but gradually changing. The youth here is treading on the path of development and education. Now, less blood is spilled on the streets, thanks to the Central Government,” said Ajmal.

Hilal Shah, chairman of Municipal Corporation of Anantnag, told Organiser: “In the last two years, J&K has not only witnessed an improvement in the law and order situation but also witnessed a pace in developmental activities. Apart from improving the economic conditions of the people, it has changed the mindset of people towards India who otherwise were led to believe that integration with India would spell trouble.” 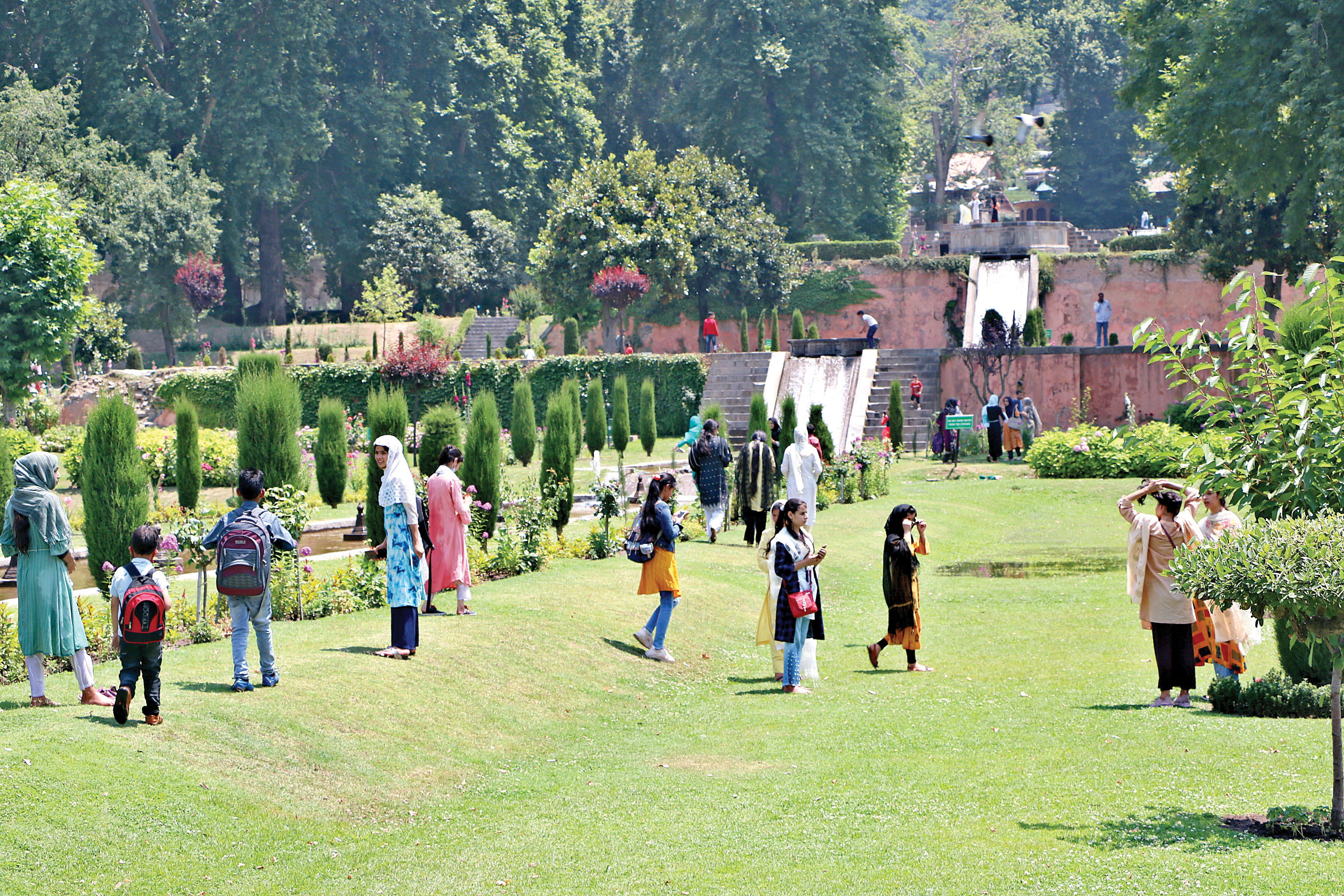 Hilal Shah, chairman of Municipal Corporation of Anantnag, told Organiser: “In the last two years, J&K has not only witnessed an improvement in the law and order situation but also witnessed a pace in developmental activities. Apart from improving the economic conditions of the people, it has changed the mindset of people towards India who otherwise were led to believe that integration with India would spell trouble.”

He further said the pace in developmental activities seen after August 5, 2019, has changed people's approach towards the Government. Transparency in the daily functioning of the administration and timely response of the administration at all levels to the people’s problems are the most significant achievements. Division of powers towards elected members of Panchayat and holding of free and fair elections are one of the most important achievements of this Government.

“This is not just what I am feeling, I am sharing this based on the inputs being received from the public and keeping in view the daily interaction I hold with people belonging to different fields,” Shah said.

ARTICLE 370, NOT AN ISSUE ANYMORE

Of late, Altaf Bukhari’s Jammu and Kashmir Apni Party and Sajjad Lone’s Jammu and Kashmir People's Conference are gaining traction in the Valley, throwing up a serious challenge to traditional mainstream parties, National Conference and Peoples Democratic Party. The Valley-based parties know that Article 370 is a thing of the past, and if they have to survive, they must talk about development, education and sports. Now, Article 370 is neither an issue for political parties nor for the general public. Even the Gupkar Alliance has accepted this new reality. But a prominent demand across all sections of society is the restoration of statehood.

“Initially, there was anger amongst a section of society but the same people are now understanding that the decision was taken for their betterment. Earlier the funds sanctioned by the Central Government for the public good were misused by vested interest but now it is being used for the welfare of the public. One thing that everyone is witnessing is that in the last two years, J&K has achieved almost 100 per cent household electrification. Due to relentless efforts of the Government, remote villages have also been electrified for the first time since its existence of 70 years,” he said.

SPORTS FOR PEACE AND DEVELOPMENT

One noticeable change that is visible across Kashmir is that now youth is drawn towards sports. One can see youth playing football, cricket, and other sports, which was rare before August 5, 2019. The current Government had adopted sports as the component for outreach and re-engagement with the Kashmiri youth. Youth are harbouring dreams of pursuing sports as a career. It’s a fact that teenagers have been more prone to associate themselves with radical activities, and sporting activities at ground zero can help counter such activities as around 70 per cent of the J&K population is youth.

Youth playing cricket in the heart of Kashmir

The current Government had adopted sports as the component for outreach and re-engagement with the Kashmiri youth. Youth are harbouring dreams of pursuing sports as a career. It's the fact that teenagers have been more prone to associate themselves with radical activities, and sporting activities at ground zero can help counter such activities as around 70 per cent of the J&K population is youth

Khelo India Winter Games is a new initiative of the Ministry of Youth Affairs and Sports under the “Sports for Peace and Development” vertical of the Khelo India Scheme in both newly created Union Territories (UTs) of J&K and Ladakh. The main objectives of conducting the Winter Games are to provide financial assistance for positive engagement of youth who are living in terrorism affected areas and for channelising of their energy in the right direction. Four sports infrastructure projects for the Union Territory of J&K have been sanctioned under the Khelo India Scheme of Indian Government. Currently, 40 Khelo India Centres (two in each of the 20 districts) have been notified for J&K.

Adil Ahmad, a budding cricketer from Baramulla says, “I want to be part of the Indian Team one day. The Corona pandemic disturbed things and we faced a lot of difficulties but now that the COVID-19 wave has slowed down, once again we are returning to the field. Kashmir is now witnessing positivity. Youth is more focused on sports and is in an aspirational mood. The Government is also spending huge amounts on sports activities and infrastructure.”

There are other stakeholders in J&K, like women whose views are not factored in sufficiently. Requesting anonymity, a young woman says, “We are living a better life now. I will not say that everything is good but yes a lot has changed. Those days are gone when every second day we used to see girls and boys pelting stones on the security forces. Some youth pelted the stones by choice while others did it for money. There was pressure on many to pick up stones. The youth of Kashmir has suffered a lot as the situation was never easy. Now, they can decide what is good for them.”

“I am happy for the women in J&K, for now, they get equal rights which were denied to them previously. Women here have now found more access to opportunities and resources to excel in their fields. We have been one of the most disadvantaged sections in J&K. Women were not just constitutionally denied their rights, there was also an erosion of their existing rights,” she said.

A LONG WAY TO GO

Nullification of Article 370 has been a poll promise of BJP from the day it was formed, and the party has fulfilled it, too. Ever since the Modi Government assumed office in 2014, it was clear that the Government will not do routine politics. It first aligned with a party with a different ideology just for the good of J&K, and later it removed the status quo.

Today, when the Lal Chowk is illuminated with Tricolour, the far-fetched dream of every Indian is a reality now. While the Modi Government is doing a lot to mainstream J&K with the rest of the country, a lot more needs to be done to improve the state of affairs, especially issues related to the youth. Now, the youth of 'New Kashmir' is experiencing 'real Azadi' and distancing themselves from the 'fake Azadi', at the behest of Pakistan's ISI, resulting in death and destruction.

EAM S Jaishankar to embark on a four-day visit to Slovenia, Croatia and Denmark starting tomorrow

Sri Aurobindo Life As A Revolutionary