Veer Banda Bairagi, the founder of first independent Sikh rule in Punjab, sacrificed his life for the protection of Sanatan Dharma. He changed the course of history by scuttling Aurangzeb’s mission to make Bharat an Islamic nation. At a time when a section of the Sikh community is becoming a pawn in the hands of anti-national forces, it is important to recapture the Dharmic ideals that inspired Banda and Great Sikh Gurus 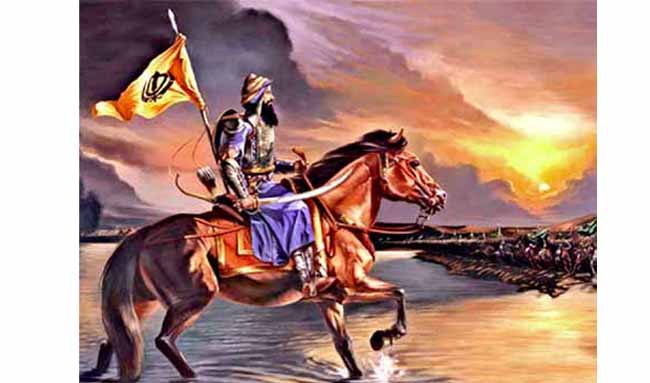 Lachhman Das was a young Hindu Rajput boy, who became an ascetic, and came to be called as Madho Dass Bairagi. He was later baptised as a Sikh by Sri Guru Gobind Singh, and became Banda Singh Bahadur — who was the founder of first independent Sikh rule in Punjab, despite the vast Mughal Empire around.

There is a lot of folklore around why Madho Dass chose to become a disciple of Guru Gobind Singh — the most common one being that he was an evil proud man who used to make a person sit on his bed, and the bed would be lifted up to the roof by his spiritual powers in order to harass the guest. One day when Guru Gobind Singh came to his house, he tried to do the same trick, but failed, and as a result his pride was vanquished, and being humbledhe got impressed by the Guru and became his disciple. Another folklore is that Guru Gobind Singh came to his house, and along with his disciples, he slaughtered the goats of Madho Dass and cooked meat. When Madho Dass returned home, he was incensed as he was a vegetarian Hindu. Guru Gobind Singh reasoned with him that when he was angry at the slaughter of animals, how could be ignore the slaughter of so many Hindus by Aurangzeb, and this argument convinced Madho Dass to become a Sikh and take up weapons.

Yet, folklore will remain folklore, and although it may sound to be a good story to read and recite, and to impress, it may not necesarily be a true reflection of the actual event. What had then made Madho Dass Bairagi become a Sikh?

As his background, Lachhman Dass was a very compassionate Rajput, and during his childhood days, he was interested in hunting. In one of his hunting expeditions, he had shot a pregnant deer, which died in front of him, and the new born baby deer she delivered also died soon after. This moved Lachhman Dass into such a state of severe repentance that he gave up his Rajput outlook, and became an ascetic by the name of Madho Dass Bairagi. 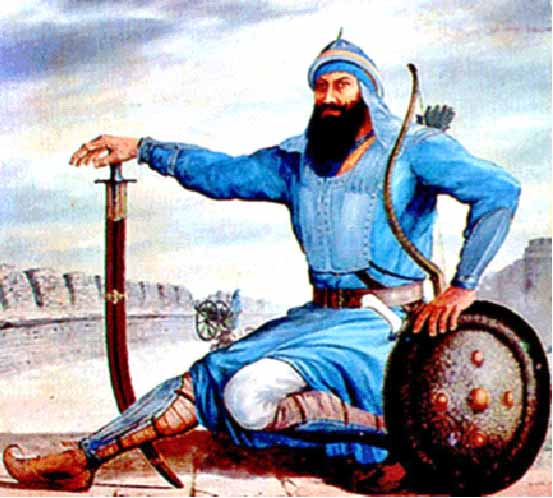 Tribute to the Great Son of Bharat on his Death Anniversary

He was a true Hindu, and followed the principles of Hinduism to the core. He was a very wise and learned man, and was aware of what was going around in India at that time, including the forcible conversion of Hindus to Islam as was resolved by Aurangzeb, the Mughal emperor of that time who had taken an oath that he would convert entire India into an Islamic nation. He was also aware of the plight of the Kashmiri Hindus who were forcibly being converted to Islam, or being persecuted. At that time, the martyrdom of Sri Guru Teg Bahadur had sent ripples all over India. The selfless act of Guru Teg Bahadur was not only appreciated, but it also gave a clear message to Hindus all over India that their faith was in grave danger.

Following that, the baptism of Hindus to adopt Khalsa brotherhood was also seen as a single biggest development to challenge the might of Emperor Aurangzeb. The only other force at that time to reckon with was that of Shivaji and the valiant Marathas. It is widely believed that the purpose of Guru Gobind Singh was to join hands with the Marathas.

The martyrdom of the 4 Sahibzaadas of Guru Gobind Singh had created an image of Guru Gobind Singh as a selfless and valiant spiritual leader who led with an example, and one who had the grit and determination to stop the forcible spread of Islam. There was no doubt left in the mind of the common citizenry of India, that the greatest hope to save the Hindu Dharma was to be a part of the Sikh Khalsa force under Guru Gobind Singh. By becoming a Sikh at that time did not mean that one ceased to be a Hindu. The persecution of nascent Sikhs borne out of Hinduism was also continuing at an almost similar rate as they were being inducted into the Sikh force. Thousands of Hindus were adopting the Khalsa baptism, fighting the war, laying their lives, and new ones were taking their place. 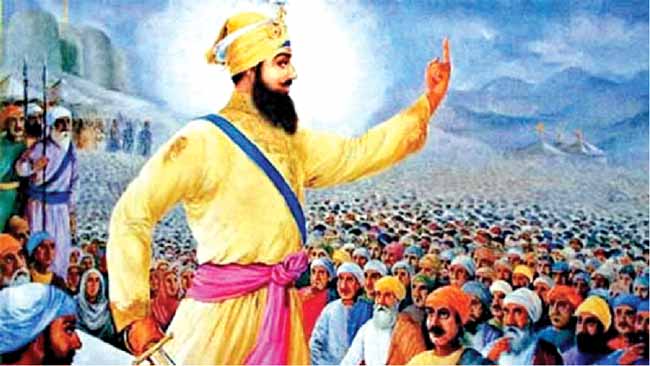 The core principle of Sikhism is derived from the same Indo-Vedic concept, and the movement to protect Dharma was a movement where the people who fought and died were sourced from the Hindus themselves, and not from Turks or Afghans

As the movement of Khalsa was geared towards stopping the spread of forcible conversions to Islam, it was a movement driven and sustained by Hindus to join the Khalsa forces and not necessarily at the cost of losing their identity as a Hindu, since at that time there was no boundary demarcating a Sikh from a Hindu, and most households had their elder sons becoming the protector Khalsa for the family. The structure of families at that time was such that Khalsa brotherhood became a defence line for the society, and Hindus came forwards to get at least one of their children, preferably the older one, to adopt Sikhism. There was no question of giving up Hinduism by doing that as it was never considered that these were very distinctly separate religions. It would make no sense for Hindus to adopt a different religion of Sikhism, and then die fighting as a Sikh, because if changing a religion was the need of the day, then Hindus would have easily chosen the easy path instead and become a Muslim, be in the good books of Aurangzeb, and then live comfortably. Then why did the Hindus at that time adopt Sikhism? That would only be possible, if they did not feel that Sikhism was an alien religion ora threat to their identity and ideology, and that by adopting Sikhism, they were not going to adopt a diametrically opposite religion as Islam, but would instead be adopting an ideology which was a mere offshoot of Hinduism itself.

At this point of time, when Guru Gobind Singh approached Madho Dass, the story of sacrifice of his father Guru Teg Bahadur, and also the rest of his family was already household news at that time.The Rajput in Madho Dass was alive as he realised that time had come for him to take the role of a warrior. The reason he chose to become a disciple of the 10th Guru, and what he said was something like this:

‘’I have heard about the sacrifice of your father Sri Guru Teg Bahadur for the sake of saving Hinduism. Now it is the duty of every Hindu to repay this debt to the Guru, by joining the Khalsa movement started by you, his son. I have always thought of repaying this debt, and would like to offer my life to you for it to be used to save Dharma, as a tribute to Guru Teg Bahadur and his martyrdom. From today I am your Banda.’’ 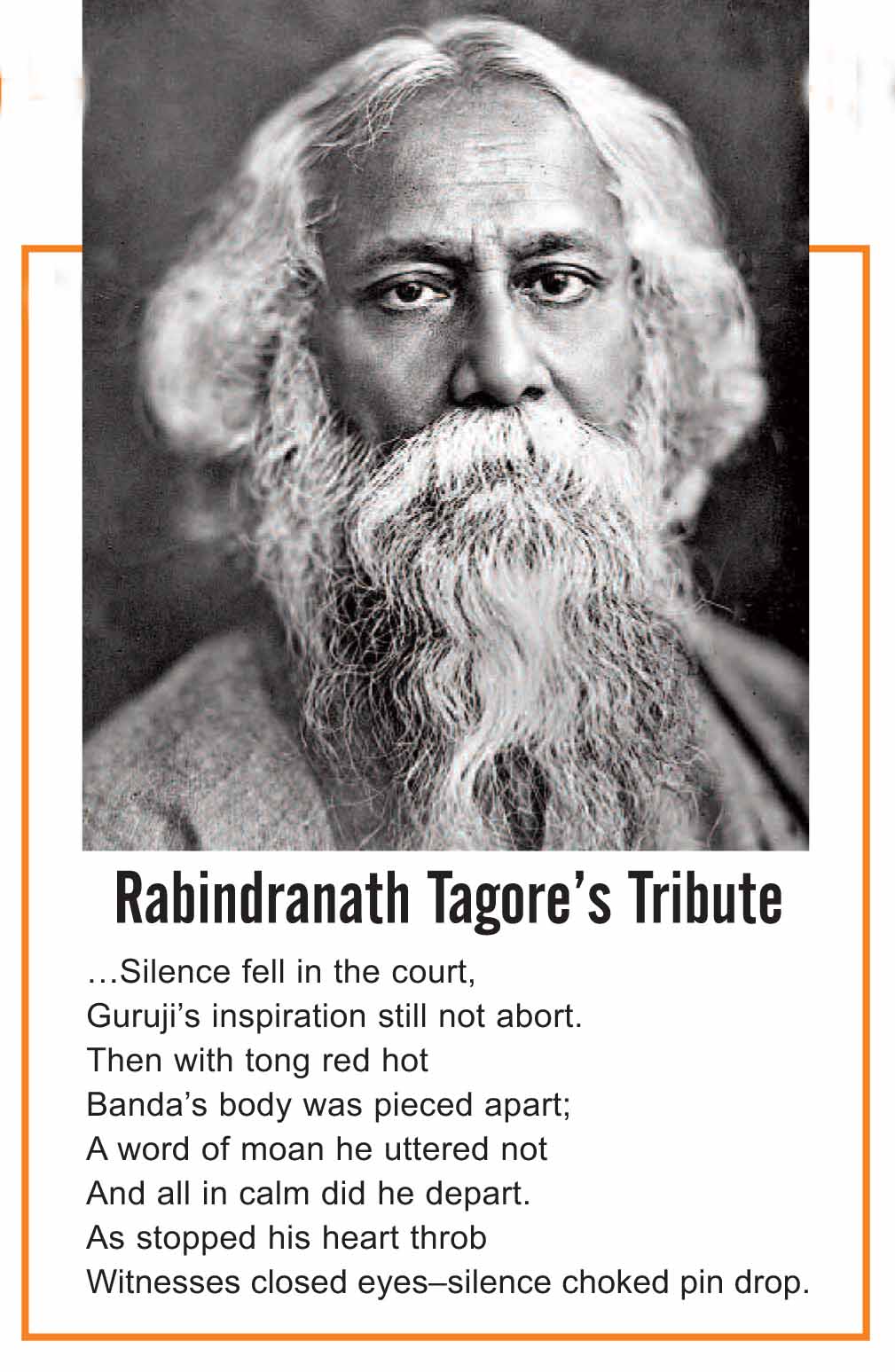 The main pillar of Khalsa brotherhood was laid by Banda Singh Bahadur, who carried the weapons and the hukamnama of the Guru, and during his march to Sirhind, all the Hindu/Sikh peasantry took baptism and became Khalsa. Now there was a new ray of hope for these people who had been suffering religious persecution under Mughals. Soon after Banda Singh Bahadur had left Nanded, and was marching towards Sirhind, news arrived that the 10th Guru, Sri Guru Gobind Singh ji had been martyred. Under the leadership of Banda Singh Bahadur, the newly baptised Khalsa forces derived from the Hindus in the belt of India from central to North India won the battle of Sirhind, and established the 1st independent Sikh rule in Punjab.

Much before the advent of Banda Singh Bahadur, when Sri Guru Gobind Singh created the Khalsa in Anandpur Sahib in 1699, the first 5 people who became baptised as the 1st Khalsa, also known an Punj Pyaaras, were derived from the Hindu community itself–from Lahore, Jagannath Puri, Meerut, Dwarka and Bidar. These were Hindus derived from all 4 corners of the country.

Much before the advent of Banda Singh Bahadur, when Sri Guru Gobind Singh created the Khalsa in Anandpur Sahib in 1699, the first 5 people who became baptised as the 1st Khalsa, also known an Punj Pyaaras, were derived from the Hindu community itself- from Lahore, Jagannath Puri, Meerut, Dwarka and Bidar. These were Hindus derived from all 4 corners of the country

Therefore the martial Khalsa movement was a self-sustained movement under the leadership of Guru Gobind Singh, and subsequently under Banda Singh Bahadur, where it was Hindus only who sustained it, and the ranks were not derived from Muslims or Christians. Hinduism is a very diverse religion, and is not only about being a Shudra or a Brahmin or a Kayastha or a Rajput, or about following rituals. The key concept is that there has been a Ram, a Krishna, a Parsuram–all have come in some form or the other and saved Dharma. The movement launched by Guru Gobind Singh was a similar one. Sikhism eliminates the differences of all mankind, but that does not come at the cost of removing the Hindu connection from it as the source is derived from Hindus itself, and not from any other community. An association with the parent religion of Hinduism will not take away the global outlook of being a Sikh, or dilute it and reduce it to being a ritualistic Hindu-because Hinduism itself is a vast religion and concept from ancient Indovedic times.The ramifications of Hinduism also include Buddhism and Jainism which are atheist religions–and Sikhism is one offshoot but not atheist, and it cannot be denied that this off shoot is attached to the mainstream parent trunk of Hinduism just as Jainism is. The Sikhism offshoot has no connections with the Abrahamic religions because the fundamental concept is different from them, but is same as that of Hinduism as mentioned in Sri Guru Granth Sahib.

Therefore, the core principle of Sikhism is derived from the same Indovedic concept, and the movement to protect Dharma was a movement where the people who fought and died were sourced from the Hindus themselves, and not from Turks or Afghans.The bond between a Hindu and a Sikh are inseparable as they are sourced from a same genetic origin and have similar Indovedic core values.

(The writer is a Delhi-based doctor and a researcher of history of India, especially Punjab)